Let us turn back the clock over 150 years to 1855, when the first pipe organ was purchased for our 13-year-old sanctuary. Regrettably, church records are not helpful. However, a small amount of information does appear, including the installation date, in a book about the Andrews Organ Company, first operating out of Waterville, then Utica, and finally, Oakland, California. They built several hundred organs, including many in the Central N.Y. area and beyond. Their records state that the 2-manual (keyboard) organ for First Baptist cost $1, 200, and that in 1861, something further was done -- perhaps some sort of addition. One only wishes that a stoplist, detailing the organ’s resources was provided, but alas, there is none.


The Andrews organ served the church up until the Estey Company replaced it with the present one. Today, the organ is quite different and larger than it was over a century ago in 1905. The church asked the Estey firm if they could use anything from the Andrews instrument in the new organ; the answer was negative. (Often, some of the pipework from a former organ can be incorporated into a new one.)


It is interesting to consider the $2, 500 difference in the prices of these two organs, separated by 50 years. Certainly we may conclude that the Estey, costing $3, 700, contained well over twice the amount of pipes and stops to control them. Accordingly, it was far more suitable and effective for our sanctuary than its predecessor.


Around the turn of the last century, the congregation was growing rapidly, undoubtedly a factor in the decision to purchase a larger organ with an increased number of tonal resources. A gift from the Pierce family made this possible. That name, along with those of many other Baptists, is engraved under one of the sanctuary stained glass windows which date from the early 1900s. 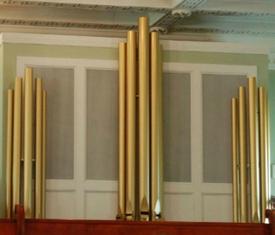 Imagine that momentous first Sunday in January, 1906, when the new Estey Opus 217 began to serve the church. Think of the thousands of times organ music has filled the sanctuary since then, during regular Sunday services and for other occasions, with ever-increasing effectiveness thanks to additions of ranks of pipes and other measures to develop the organ’s potential. For many decades, this has been accomplished by Kerner & Merchant Pipe Organ Builders of Syracuse. Our long and continuing association with K & M has proved greatly advantageous both in terms of improvements and regular maintenance. Major renovation was completed in 2001.

In the spring of 2004, K & M built the antiphonal division, containing 6 ranks (sets) of pipes, located in the rear balcony (right side, facing). Twenty-five chimes, playable from the organ console, had already been in place for several years on the opposite wall of the balcony. A splendid variety of sounds emanates from these two sources; additionally, the metal chime tubes and the 15 antiphonal-division façade pipes are visually appealing.

The eminent Will Headlee, now Professor Emeritus of organ at Syracuse University, presented a recital in June, 2004, to celebrate both the completion of the new organ division (an appropriate plaque is affixed to a wall of the balcony chamber) and to mark the centennial of the chancel organ (original Estey), whose contract was signed in 1904. Since the Headlee event, we have hosted several recitalists to showcase our organ. This effort continues.

Organ music has for generations been appreciated at First Baptist as it supports and complements regular worship services and other occasions such as weddings and funerals. Note, however, that the recital occasion, here or elsewhere, differs because the organ and organist are the center of attention. A thoughtful choice of selections presented during a recital ideally offers the experience for listeners to sample the full range of the instrument’s expressive capabilities and tone colors over an extended period of time. Results vary to be sure, depending on acoustical conditions in different settings and the size/quality of a particular organ, not to mention the level of skill shown by the performer. Those accustomed to the organ mostly at Sunday services are quite often surprised and delighted when they attend a full-length pipe organ concert. 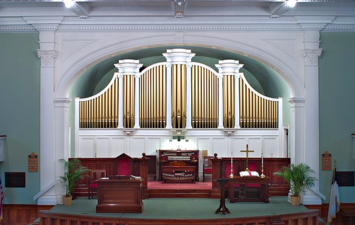 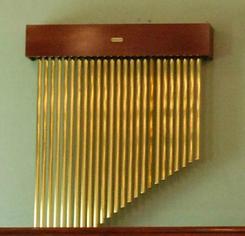 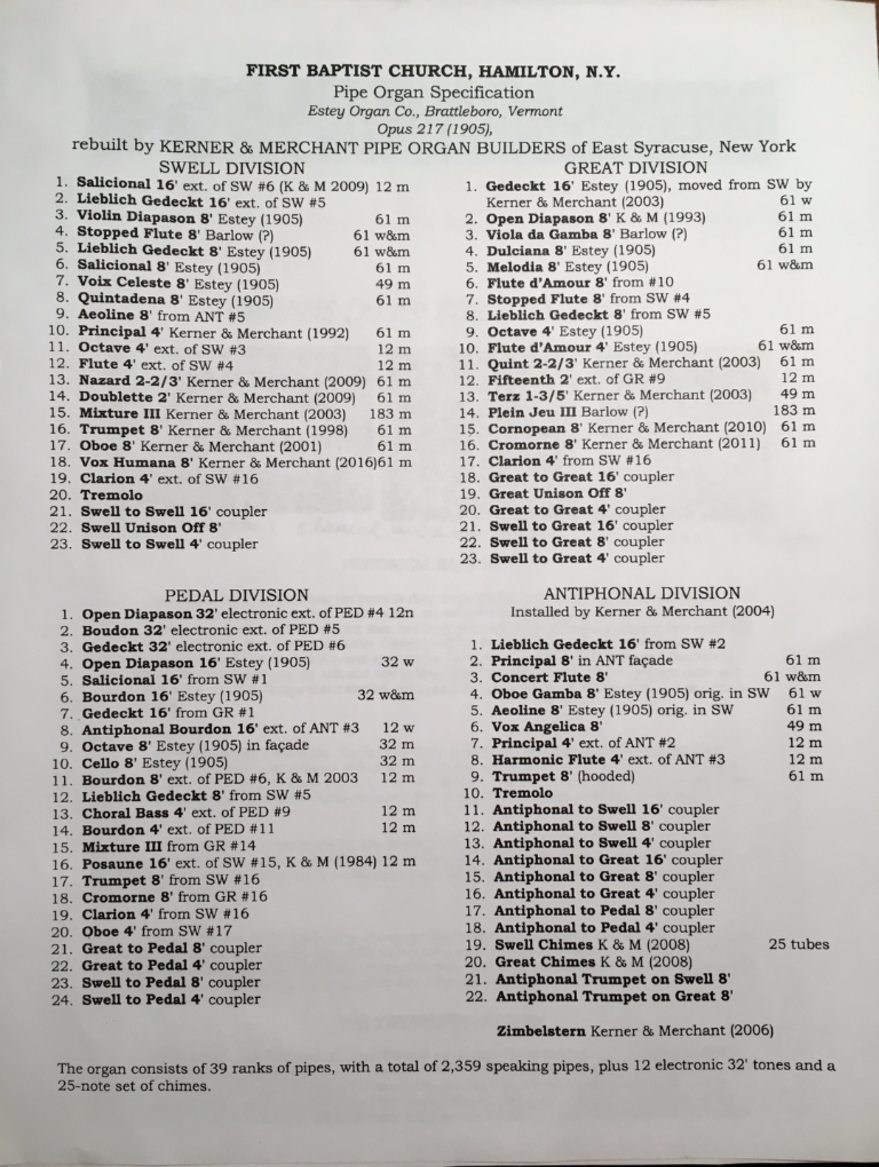 The fabled Ontario & Western Railroad brought a pipe organ from Brattleboro, Vermont to Hamilton around the middle of December, 1905. Employees of the Estey Company installed the organ, Opus 217, over the Christmas holidays, a rather unusual time but one that circumstances necessitated because major refurbishing of the sanctuary and the construction of a large rear addition to the building were running far behind schedule. While this was going on, the church was closed for 18 months:  far longer than originally anticipated.

One can only imagine the excitement felt by everyone on that first Sunday in January, 1906, when the church finally reopened. The majesty and grandeur of the new organ, with its splendid Greek-revival case, were evident as music sounded forth once again, in praise of God. The Reverend Daniel Clare proudly presided at this important celebration, marking the completion of work in the sanctuary and the spacious rear addition that we know today.
​

Since the 1905 installation, the organ has periodically undergone several changes in line with numerous technological advances affecting not only organbuilding but human existence in general. Today, in the 21st century, the organ’s mechanism is appreciably different from what it was in 1905. Over the decades it has become far more streamlined, versatile, and “user-friendly.” To cite the earliest example of major change -- Estey Opus 217 operated at first without an electrified wind system to make the pipes speak. Instead, a rather clumsy water-powered system supplied the necessary wind pressure. It depended on gravity, as chambers with moving partitions filled and emptied, creating the needed wind supply. Despite their limitations and shortcomings, these water-powered wind systems for organs, once widely used, signaled something of an advance. Previous to them, human power was needed in order to operate one or more bellows, according to the number of organ pipes:  one pumper for a small instrument, but many more for cathedral-sized organs. (Probably only one pumper was needed for the original Andrews organ.) The advent of the electric blower in the mid-to-late 1800s was perhaps the greatest advance in the organbuilding industry.


In the early 1900s, electricity was rather new to Hamilton, and service was not entirely dependable. The situation of course improved with time. However, it took a few years before the church decided to replace the problematical water motor with an electric blower, located in a closet-like space in the kitchen. Now, there was a steady, dependable supply of wind pressure, without the noise and other problems connected with the earlier system.


A noteworthy event was the dedicatory organ recital on the new Estey, by one of the best known organists of the era, S. Archer Gibson, on February 15th, 1906. This proved to be a dramatic “first,” since there was no comparable organ in the immediate area at the time. Rave reviews followed Gibson’s performance, as records indicate.


Over 10 years would pass before the construction of the Colgate University chapel and the acquisition of a 3-manual organ built by the prestigious E.M. Skinner Company of Boston. Until then, many Colgate functions, including graduations, took place at First Baptist. The June 1905 graduation ceremony was held elsewhere, because of the aforementioned work delays. Meanwhile, our organ-to-be sat in the Brattleboro factory. Ready for shipment in the spring of 1905, it never made it until December! The installation crew was specially thanked by the Estey Company for working over the holidays. 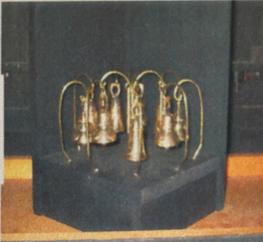 Included:  present (2017) specifications (“specs,” as organists say). Note the total number of speaking pipes:  2, 359. This includes all 15 façade pipes for the antiphonal division and 35 of the 63 (middle portion) of the chancel façade.

​Pictured below:  the zimbelstern