On November 16, 1796, the Madison County village of Hamilton's first church, First Baptist, was organized at the home of Samuel and Betsey Payne. Most of the village settlers seemed to have been Baptist transplants from new England who resolved, with the aid of divine providence, to turn "the howling wilderness into a fruitful land." Samuel's brother Elisha, who had founded the village in 1795 and named it for his favorite statesman, Alexander Hamilton, joined the church in 1799. Until 1826, the Baptist Church was the only house of worship in the village.

The initial Baptist house of worship stood near the north end of the village park. Built in 1810 at a cost of less than $4,000. it served until destroyed by fire on the last day of 1818. The current church structure is in the New England meeting house style and was dedicated in 1843.

Even before the congregation had its own house of worship, however, it responded to its first great interest - missionary work among the Native Americans and white settlers of central and western New York. And, to provide trained clergy for this missionary enterprise, in September of 1817 nine members of the Hamilton church met with four other Baptists of the area at the home of First Baptist Deacon Jonathan Olmstead.

With 13 dollars and 13 prayers, these 13 men founded the Baptist Education Society of the State of New York. The Society's first action was the establishment of a ministerial training school, later named the Hamilton Literary and Theological Institution. Chartered in 1819, classes began in 1820. Reverend Daniel Hascall, Pastor of First Baptist, was the first instructor, teaching ten students.

In response to the growth of the institution and its need for its own property, in 1826 the founders of First Baptist, Samuel and Betsey Payne, donated their 123-acre hillside farm for the school's campus. Although there was a $2,000 contract for the property - half the land's value - there is not record of payment ever being made.

In 1846 the institution was renamed Madison Seminary and then, in 1890, Colgate, in honor of the family of wealthy soap maker and Baptist benefactor William Colgate who took great interest in and gave generously to the Institution and Seminary. For many years, the First Baptist sanctuary served as the Colgate chapel. For good reason, the church is known as "The Mother Church of Colgate University."

First Baptist Church continues as a vibrant congregation affiliated with the American Baptist Churches-USA. Those worshipping at First Baptist each Sunday come from many different Christian denominations. The church is very involved socially in its community, meeting the needs of local residents and in missionary enterprises around the world.

Of historic note is the First Baptist pipe organ, one of the finest such instruments in central New York. Much remains of the original instrument built in 1905 by the Estey Organ Company of Brattleboro, Vermont, including the beautiful casework, the front façade of pipes, and fifteen-plus ranks of speaking pipes. The organ has undergone several renovations and additions, the latest being the installation of an impressive antiphonal division in 2004.

​Select to view the organ page 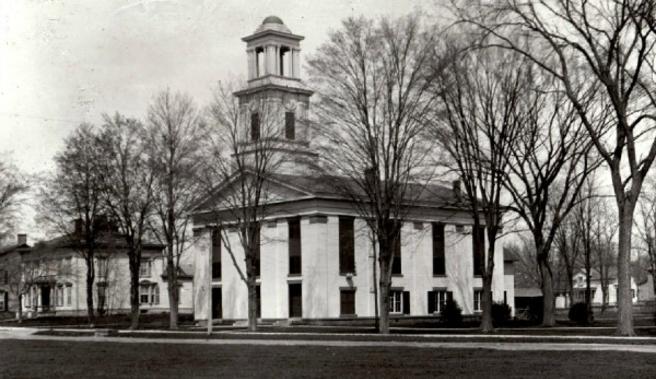 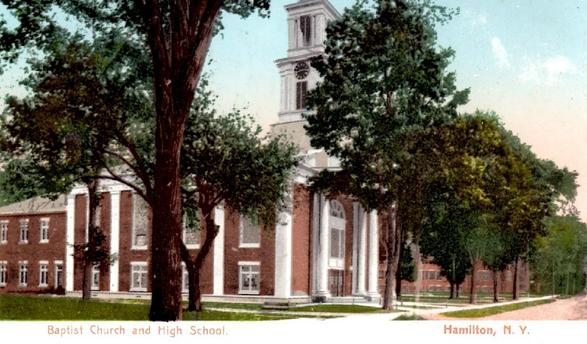 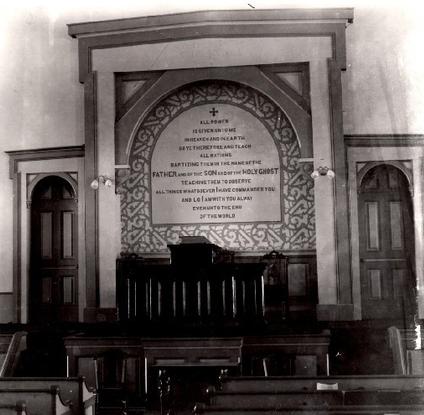 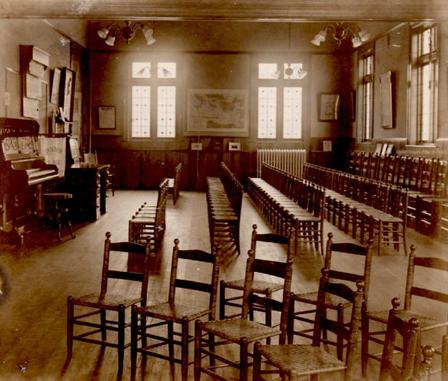 Old First Interior
The inscription on the wall behind the pulpit states:

All power
is given unto Me
in Heaven and in earth
go ye therefore and teach all nations
baptizing them in the name of the
FATHER and of the SON and of the HOLY GHOST
teaching them to observe
all things whatsoever I have commanded you
and lo I am with you always
even unto the end
of the world.

The old Sunday School room at First Baptist Church. Notice the chairs are those still used in the fellowship hall. The kindergarten room used the mini children's chairs.

Over 200 years of bringing the news

of Jesus Christ to the local community

and to the world

First Baptist Church, founded in 1796, is the oldest church in Hamilton and has held worship in the present building since 1842.

It is known as the "Mother Church of Colgate and the Colgate Rochester Crozer Divinity School," having had an instrumental role in the founding of what became Colgate University and CRCDS.

​
While the church is affiliated with the American Baptist Churches USA, its present membership is made up of those from many denominational backgrounds who claim allegiance to Jesus Christ as Savior and Lord. In His name, we welcome all to this service of worship.

From an old postcard

First Baptist Church with red painted brick, portico in the front of the church and addition in the back. The postcard is entitled "Baptist Church and High School." You can see the school to the right of the church. Notice, the gleaming white sidewalks and the dirt street.

This circa 1900 photo of the original façade of the church shows it painted white and without the stained glass windows, the columns and portico in the front, and the addition on the back. Notice the dirt streets and the step in front of the church by the road for passengers to descend from carriages. 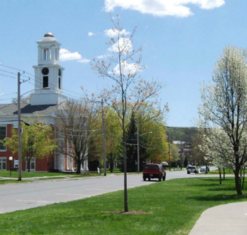